I read Charles Blow’s withering statement of defiance to the incoming Trump administration and was pleased to see that an editorial columnist of his standing has taken such a committed stance of resistance based on a “moral obligation to do so.”  All journalists should resist the ‘honeymoon’ with Trump and hold his feet to the fire with unsparing research and reporting. However, I am disturbed because I have not seen Mr. Blow’s fellow journalists take up the moral cudgel against the NY Times and its historic deference and service to the Central Intelligence Agency during and since the Cold War. As Carl Bernstein made clear in his 1977 Rolling Stone article castigating the Church Committee report on the Agency’s history of malfeasance, “By far the most valuable of these associations, according to CIA officials, have been with the New York Times, CBS and Time Inc.” (Carl Bernstein, “The CIA and the Media”)  Trump called the Times “a great, great American jewel,” signifiying its former (and probably current) position as the crown jewel in the CIA’s media assets.  More chilling is the incoming Republican’s wish, “And I hope we can all get along well” as it raises several questions that the artist and scholar-activist community should attend to: What will the press and the incoming president ‘getting along’ look like?  How has the USG used the media to manufacture consent for its policies? Will it repeat the CIA’s use of the Fourth Estate as its echo chamber for conservative foreign policy? Will it drum up support for the extradition of dissidents like Assata Shakur, the Black Panther Activist falsely convicted of the murder of a NJ state trooper and who subsequently escaped to Cuba where she lives today?  The Trump campaign’s position suggested that he would crackdown on the media. Will president Trump use these threats as leverage over a historically all-too compliant press?

As the CIA and Times shared history of manufacturing consent will show, advocates of self-determination and freedom for all, regardless of color, should be alarmed. In 1961, New York Times reporter Paul Hoffman–a WWII era Nazi agent– lent his voice and the gray lady’s gravitas to falsely condemn the emerging Congolese democracy under President Joseph Kasavubu and Prime Minister Patrice Lumumba. David Talbot relates that

The New York Times coverage of the Congo crisis had always been slanted against Lumumba, with columns and commentaries labeling him “inexperienced and irresponsible” and a “virtual dictator.” But Hofmann’s Congo coverage was so virulent in its bias that it seemed as if he were acting as a “psywar” conduit for U.S. intelligence. (Talbot, Devil’s Chessboard, p. 383) 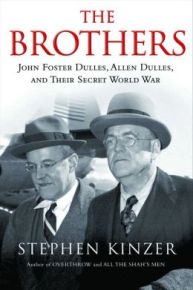 “unlamented” disappearance from the political stage “brings us hope.”

Relative to the American National Security State including the CIA, President Trump has a lineage that should be noted. Trump’s mentor, Roy Cohn, worked both ends of the Mafia CIA connection by defending mafioso in lawsuits, by working for Wisconsin Senator Joseph McCarthy’s purge of left-leaning government officials–a Red Scare, which disproportionately targeted Black public figures like Lena Horne, Benjamin Davis, Paul Robeson, and W.E.B. Du Bois. If Trump governs in a mold set by Nixon, his administration will be a ready-made trojan horse for the worst of America’s policy options relative to Black and Brown people:

Nixon grew into a potent political weapon for the Dulles group, a cunning operator who managed to accrue solidly conservative credentials with the Republican Party’s popular base while dependably serving the interests of the GOP’s privileged leadership class. Together, the Dulles circle and Richard Nixon would bring about a sharp, rightward shift in the nation’s politics, driving out the surviving elements of the New Deal regime in Washington and establishing a new ruling order that was much more in tune with the Dulles circle’s financial interests. Talbot, Devil’s Chessboard, p. 161)

Given our incoming President’s penchant for oligarchs like Putin, his resistance to surrendering control over his financial interests or to release his tax records, we can expect four years of opacity, mendacity and dirt-dealing that could make Allen Dulles and Tricky Dick jealous.